While it was always my intention to make this film, it didn’t ever get off the ground during this time, and it was starting to seem like it would never happen.  Finally… with a much needed big push from my producer, Chris, the project entered Pre-Production in January 2018, and we built a team of talent that would bring this idea to life.

Originally, the film was called Alia, and it took place on an alien world, with a hideous alien creature having a lucid dream, where it experienced what life was like as a beautiful human woman on earth.  Despite the woman’s beauty on the outside, her personal life was a mess and very lonely, and she ended up committing suicide.  Ultimately, this concept of a hideous creature discovering what it means to be beautiful remained, while the more physical aspects of the film were changed.

It was clear to me that I did not have resources to create an entire alien world, as depicted in the early Alia drafts.  In addition, the early drafts weren’t quiet working as a script.  So, we simplified the film significantly so it took place entirely on earth, in a normal every-day apartment, while also rewriting much of the story so it became a lot more relevant and personal to me and my life.  The alien character was re-written into a creature (no longer an alien, yet still not quite human) lurking around inside the beautiful woman’s trashed apartment.  The woman’s name was changed from Alia (a non-human name, hinting at an alien) to Sophia, as we kept the “ia” at the end of her name, while also naming her partly after someone in my personal life, who caused me an intense amount of emotional pain (the earlier Alia drafts had nothing to do with my life whatsoever; it was all made up).  After all these changes were made to the script, it became clear that the name of the film should also change from Alia to something more fitting to the narrative, and hence the film ended up being called Shallow.

Chris and I hired a Director of Photography, Special Effects Makeup Artist, Production Designer, Camera Crew, Composer, Sound Mixer, and a Colorist to make this movie.  In April 2018, after the crew was set, we held formal auditions at CAZT in West Hollywood for the 3 main roles (The Dark Creature, Sophia and her boyfriend Joseph).  We struggled to find the right male actor for Joseph, but we got extremely lucky with John who nailed his audition and ended up being the perfect fit.  We found the actress, Ruby, for the creature off of craigslist, and also got extremely lucky with her, as very few other actresses were interested in getting into full body black creature makeup.  As for Sophia, we had nearly 30 different actresses interested… as EVERYONE wanted to play the beautiful girlfriend!  Casting Sophia was by far the most difficult part of casting.  I had no idea who we’d end up choosing.  In the end, after several tough decisions, we ended up with Marie, who was so perfect for the role and did an amazing job.

Shallow entered production in May of 2018, over the course of 2 weekends (4 full days of filming).  I self-funded the film, and paid the entire crew out of my own pocket (I did not use kickstarter, or any other fundraising resources), using the money I saved up from my current gig at the time while working in post-production on Godzilla: King of the Monsters.  I poured so much of my savings from that job into this film, having spent about $6,000 to get the film finished.  It was so worth it.

Post-Production lasted the second half of 2018, and the film was completely finished by the end of December of that year.  We entered the film festival circuit in 2019, and won several small online film festival awards, and got screened at Glendale International Film Festival in October 2019, which was the highlight.  Here’s a picture of the movie theater that screened Shallow, and a picture of Chris and I on the red carpet (click the images to enlarge): 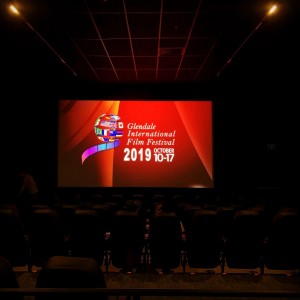 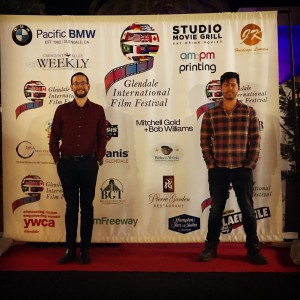 Finally, I’m ready to release Shallow online to the public.  Without further ado, here is the final, finished film – please enjoy (set the quality to 1080p):

After the film was finished, I ended up putting together an additional short 5 minute Behind The Scenes video, which gives you a special exclusive look into the making of Shallow.  We had such a large amount of unused footage and outtakes, that I knew this featurette was begging to be made – please enjoy (set the quality to 1080p):

Shallow was intended to be the first of more narrative short films I plan on making in the future.  While I am not yet ready to officially announce any future projects, I can say that I have a handful in development, in collaboration with several different creative friends I’m working with.  More to come!

The tales of a Video Editor working in Hollywood.